What are the differences between Windows 10 and 11?

After six years, Microsoft has finally released the latest version of its operating system, Windows 11. At a time when computers and technology play a key role in human lives, tech companies are striving to deliver the greatest user experience possible to capture the ever-growing market. Today’s blog will cover the topic of “What are the differences between Windows 10 and 11?”.

Windows 11 is Microsoft’s answer to the growing demand for better technology for both home and business use.

Since the release of Windows 11, one of the questions we get asked is how exactly does it compare to Windows 10? If this is something that you’ve also been wondering then this blog post will help you to better understand a few of the most significant differences between the two operating systems.

One notable difference between Windows 10 and 11 is the interface. Windows 11 has had a makeover and the interface is very different to that of Windows 10. If you’ve used any Apple macOS devices before then you might see some similarities. The new Windows 11 interface features rounded corners and pastel shades providing a much cleaner and neater design than its predecessor. Windows 11 has also gone for a more simplistic look in comparison to previous versions.

The most drastic change in the interface, however, might be the movement of the iconic Start menu away from the left-hand side of the screen and towards the centre. Another parallel to the design of macOS. Much like Windows 10, however, you still can move the Start menu to wherever you want.

Microsoft has also given File Explorer a makeover and it is even more visually pleasing on Windows 11. The new and improved File Explorer has improved immensely and offers faster results and a cleaner, sleeker and more efficient interface.

The new File Explorer interface has been optimized to provide quick recommendations and allows users to jump in and out of apps with ease.

One of the most notable differences between Windows 10 and 11 is the improved performance of the system. Windows 11 has a leaner and faster kernel than Windows 10. If and when you make the switch, you will notice the performance tweaks and some of the new features that Microsoft has packed into the new operating system which offers performance improvements never seen before in a Windows upgrade.

You can expect to see speedier run times, Microsoft has made some crucial improvements to the way that the system prioritises applications and processes, allowing for foreground applications to run much quicker and smoother and allowing more CPU and system resources to be allocated when an application starts.

Microsoft has also upgraded the Edge browser so that a user can open multiple tabs and start multiple tasks in the Edge browser, these applications will start without delay. This is because, under the system mechanism of Windows 11, these applications have been set to run in the foreground and can boot up much quicker than previously with Windows 10.

As a result of these improvements, Windows 11 is much more responsive than its predecessor, particularly when users launch multiple applications on an already busy operating system.

And, to improve the experience further, Microsoft has enabled the sleep tab in Edge by default in Windows 11. This allows the device to recover from sleep faster than before – allowing for a better user experience.

Windows 11, brings us some fantastic new multitasking functions that allow you to refocus your workflow and allow the apps that you use daily, i.e. PowerPoint, Microsoft Edge, Teams etc., to work seamlessly together.

Again, multitasking is a function that has been about for a while on the macOS and Microsoft have made this function a primary focus in the Windows 11 upgrade. The new operating system allows you to toggle between multiple desktops for various features, for example, you may set up a desktop for work, school and personal use.

One of the main features of the multitasking function is the Snap Layouts. Snap Layouts offer a flyout display that allows you to move your mouse over to access the desired window and move/relocate a window for future use. This feature also saves the window so that you can access them later using Snap Groups. And although multitasking was featured in Windows 10, the upgrade to Snap Layouts is a much-anticipated improvement.

Windows 11 offers Snap Layouts that consist of collections of apps that you frequently use at the same time. This new and improved function allows for quick and simple task switching, allowing you to take on more work and increase productivity. 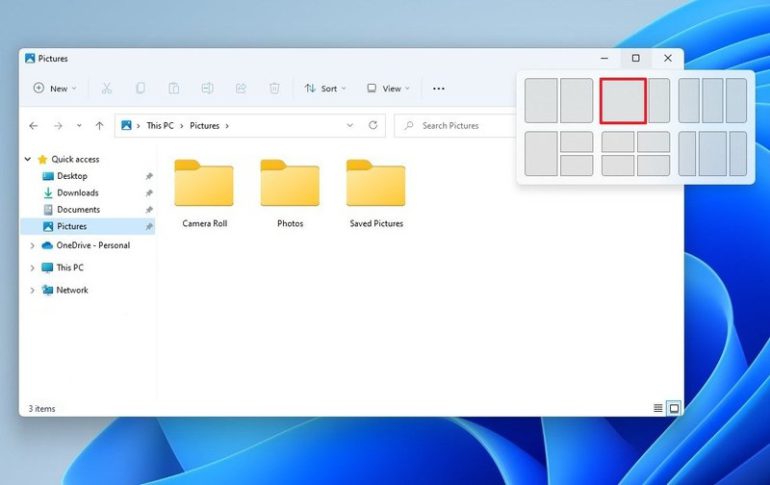 Pictured above is the new Snap Layouts feature available in Windows 11.

Although widgets have been around for a while, they’re finally being given the recognition and attention that they deserve. In Windows 11, you can utilise a collection of live feeds which offer updates and recommendations to ensure that everything is automatically personalised to suit your requirements and are powered by AI to curate everything based on your interests and location.

And these are just some of the new features included in the latest Windows Upgrade. With an improved interface, performance and productivity functions, Microsoft has pulled it out of the bag with the upgrades to Windows 11 and there’s no denying that the new operating system will offer improved performance and enhanced capabilities but we know that change is not for everyone. That means you don’t need to jump ship to Windows 11 if you’re not ready to do so just yet. Technology is only as effective as how much you use it. So, if you’re already a master of Windows 10 and it makes you 100% productive, then there’s no reason to make the change immediately.

However, if you are considering making the change from Windows 10 to Windows 11 but you want to know more about its hardware compatibility and security updates then why not give us a call and one of our engineers can help to answer any questions you might have about making the switch and provide you with the support to do it.